Walter D. Harden was born in Everson ,Pa. March 30 1904. From an early age he enjoyed the great outdoors. He was particularly fond of fishing. In his twenties, Harden occupied the summer months running his families refreshment stand at Whistlepark in his home town of Connellsville, Pennsylvania. During the winter , Walter spent his time in Florida, where he was a very successful  guide for fishing parties. 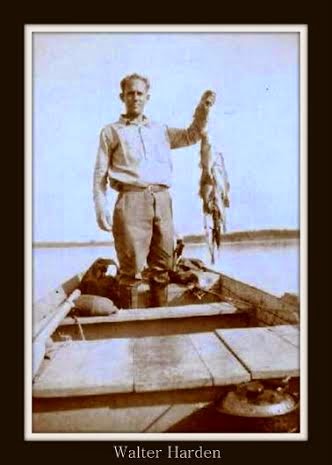 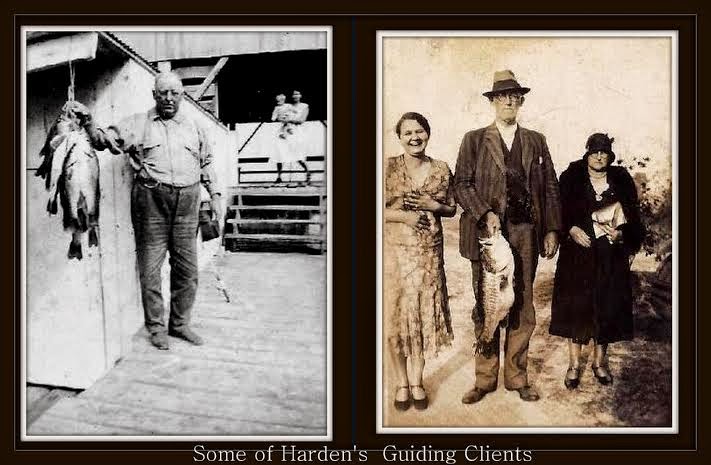 One of his favorite spots was Lake Apopka, Oakland Florida. It was there on February 6, 1931 that Harden caught  what was recorded to be a World record Black Smallmouth Bass. Walter and his wife Marguerite had set out from the Oakland dock to a certain spot where Harden said the big ones seemed to stay. While  using a Creek Chub Bait Company  Pikie Minnow in silver shiner color , Harden caught a bass weighing in at 12 3/4 pounds and measuring 29 inch in length.
Creek Chub Bait Company even  featured Harden and his 12 3/4 lb. bass in one of the companies 1931 advertisements. 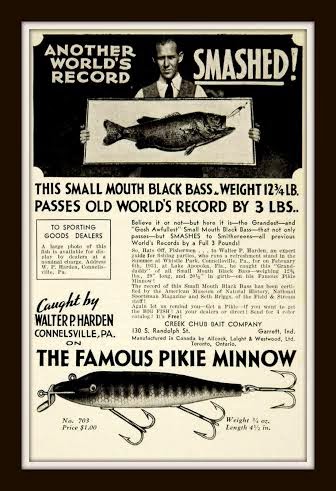 The Creek Chub ad mentioned that large photos of Harden's record fish were available to Sporting Goods Dealers  for a nominal charge directly from Walter Harden. 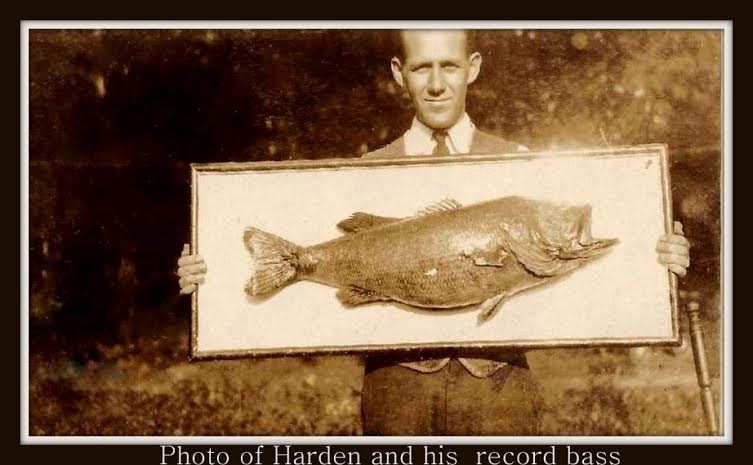 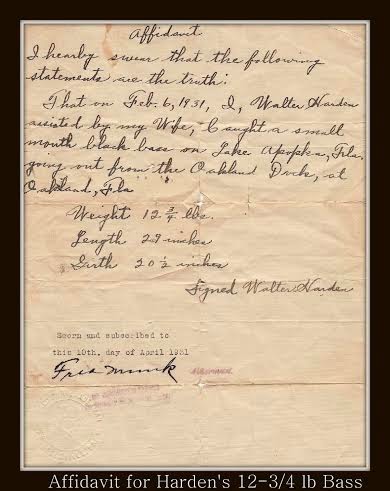 This record catch was certified by the American Museum of Natural History, National Sportsman magazine as well as Seth Briggs of the Field and Stream magazine staff.
Briggs realized that recent catches of record smallmouth bass  in Florida had raised questions regarding the introduction of the species into Florida waters. Briggs discovered the story regarding the planting of Smallmouth Bass in Lake Seneca and other nearby Florida lakes.
Samuel A. Hamilton of Huntingdon, Pa.  reported that in 1908  as a result of his request ,  Senator Quay sent 10,000 Smallmouth bass fingerlings which ranged in size from four to six inches to the Eustis Fla. area. With the help of Game Commissioner Dr. Ike N. Kennedy , the fingerlings were placed in smaller well shaded Lakes in Lake County. It was believed that Walter Hardens record catch was a direct result of  this stocking effort.
On February  9 , 1932  Walter Harden found himself breaking his own Small mouth bass world record. This time ,while fishing a large live shiner minnow, Harden took a 14 pounder from his special spot on Lake Apopka.

Like his previous record bass, this trophy was sent to Field & Stream magazine and The Natural History Museum and was officially recorded as a World record Small Mouth Bass. With  two record catches under his belt,
Harden had become recognized as a top notch angler.  He decided to share his fishing knowledge in  a 1936  booklet titled  " How to Catch World's Record Bass" 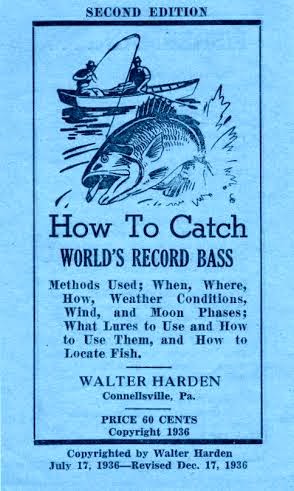 Harden also mentioned that there were a couple of other lures he was sure to have in his tackle box .These lures were a result of his experimentation in changing up hardware on factory made plugs. Harden said that through this type of experimenting he had found a couple of lures that he had changed to be consistent fish getters. He said by changing hardware an angler could find just what the fish would take in a particular locality. Perhaps it was through this experimenting that the Harden's Star and Harden's Whiz were born.
By adding spinners to the Heddon Zaragossa, Walter Harden created the Harden's Star bait and by removing the diving lip  and adding spinners to  Heddon's Vamp and Baby Vamp , he created the Harden's Whiz bait.  Harden's modifications proved to be a success for catching bass in Florida.
Walter Harden never mentioned the Harden's Star or  Whiz baits by name in his  " How to Catch World's Record Bass" booklet , but I believe that they were  the two secret baits he discussed on the last page of  his booklet.
The last page of his booklet was titled  'The Best Two Lures I Have Ever Used".  These were lures that he had perfected and found to be the most consistent lures that he had used in the taking of bass. One lure was a described as a surface lure  that imitates a live minnow swimming on the surface of the water better than any lure he had ever seen. The other lure was a semi-surface lure that  had the same action as the surface lure. He went on to say that he had kept these two baits a secret for the past two years and tested them under all conditions. He claimed they caught more big bass in so short a time than any other lure he knew of. Harden said that anglers may already have the parts to make these baits in their tackle box, as that is how he made his up. For twenty five cents Harden offered a separate booklet which would reveal the secret of these baits and that only the purchaser of that booklet was entitled to the secret.  As far as I know, a copy of this  twenty five cent secret lure booklet has yet to be found.
Heddon made Harden's Whiz and Star baits have been found with Heddon factory paint stenciling on the  belly of these baits. Some of these Harden baits have been found in Heddon Lure boxes. Some of the boxes have Heddon's typical ink stamp on the end of the box indicating the model/color  code for the bait. The ink stamp code for  Heddon/Harden baits had the prefix WH ( Walter Harden). Other Heddon/Harden baits have been found in Heddon lure boxes with a brown paper label pasted on the boxes end. The brown paper over labels feature the lures name such as  Harden's Star or Harden's Whiz and the color of the bait plainly  typed on the paper. I have been unable to locate any advertisements for Harden's Star or Whiz baits.  It is believed that these baits were specifically designed for fishing in Florida.

Only a small number of Heddon / Harden special  baits  have turned up in the hands of collectors and are very desirable.
Like the production of his baits by Heddon, Hardens Small Mouth Bass record was to be short lived. A larger specimen had not been caught, but his record was disqualified. The disqualification was not based on any deceit or wrong doing  by  Harden.
The disqualification was based on the scientific findings of Ichthyologists Reeve M. Bailey and  Carl L. Hubbs. their findings are contained in number -516  Occasional papers of the Museum of Zoology dated  February 25 ,1949  - The Black Basses of Florida, with a description of a new species. In their writings Bailey & Hubbs mention Walter Hardens Feb. 9, 1932 fourteen pound  smallmouth catch, which was credited by Field & Stream magazine as the record smallmouth bass. Bailey & Hubbs state that the smallmouth bass had long been regarded as an exotic inhabitant of certain  lakes in the vicinity of Oakland Fla. by Sportsmen and  writers on game fishing. Belief that the smallmouth was established in Florida was based on known introductions of northern stock by U.S. Bureau of Fisheries and by identifications of large fish taken subsequently . These fish were identified by a number of anglers as well as Ichthyologists. The Bailey & Hubbs go on to say that Hardens record was accepted as reliable and mentioned in several pamphlets and books written earlier, including one of their own works, even without having any first hand evidence.
Bailey & Hubbs  stated  they were skeptical of  the reported success of plantings of small mouth bass in Florida.  Reported examples of  large smallmouth bass that had been available for inspection were determined to actually be Largemouth bass, some of which were thought to be stunted and their size and shape had been considerably changed. They went on to say that collections by themselves as well as  numerous other game fish/ wildlife agencies and universities had found no smallmouth bass in Florida.
Bailey & Hubbs posed the question" Why then have  ichthyologists identified record sized fish as smallmouth ? " a question which they went on to answer. Apparently descriptions and keys available at that time for identifying species of fish compared northern smallmouth's with northern ( not Florida ) largemouths. They went on to say that is it now evident that the peninsular largemouth parallels the smallmouth in certain characters commonly used for identification, both forms contrasting in these respects
with the northern largemouth. They also stated that there was an undue reliance on scale count which was the chief cause of misidentification.  They also stated mounted specimens were difficult to identify  and were not reliable  for  accurately determining species. They went on to discuss proper techniques to identify species. They concluded that there was no valid evidence that the smallmouth bass was established in Florida.
Bailey & Hubbs  went on to recommend the removal of Florida fish from
consideration for the title of "world's record" smallmouth
bass. Furthermore they left  the decision as to what fish properly
deserves the distinction of holding the record to others, but stressed
the importance of accurate identification.

Although his World record did not stand the test of time. There is no doubt Harden was an outstanding Bass fisherman. Hardens special Heddon baits continue to draw the admiration of fishing lure collectors and are prized among those lucky enough to have an example in their collection. 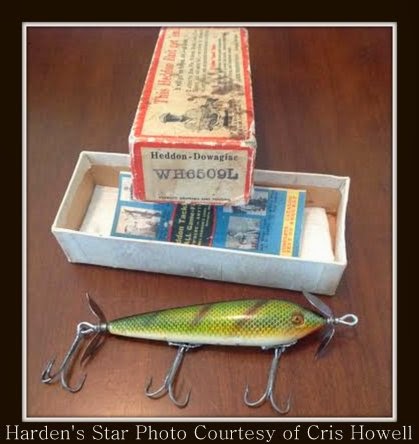 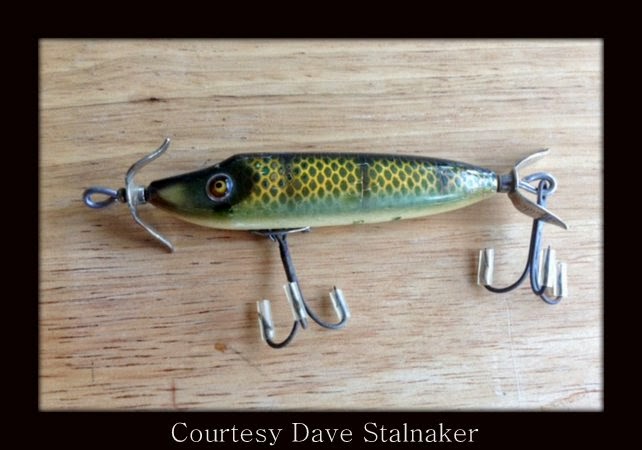 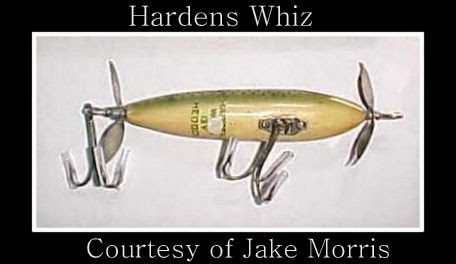